It wasn’t an easy decision to leave my adopted family in Nepal in March just as the Covid-19 started to emerge its ugly head. When I departed on the 3rd March 2020 there was only 1 positive case, who was a boy returning from overseas. Now 18 months later 680,000 cases and 76 deaths. You may say not as many as other countries, but remember Nepal is a very poor country with limited COVID testing, so, therefore, the numbers are possibly higher than thought. However, my husband and family were eager to see me return to Australia where the situation would be a lot safer than staying in Nepal. Little did we know that we were on the brink of a global pandemic that would see countries locked down indefinitely and overseas travel curtailed.  When I returned home and after several months my friends would say to me “how are you coping being at home for so long”. This was not an issue for me as I seem to have the ability to just slot in wherever and be happy.  Being home has its upside, just being with family, friends, my dog, and having the time to learn new skills is rewarding in itself.
Now I thought it time to reflect on my last trip to Nepal and share it with my readers.  Between my time in Kathmandu and Maguwa village where I support a family and work as a volunteer at a remote village school, I hiked to the epicenter of the 2016 Earthquake. I had visited Barpak 8 years prior and I wanted to see how the village had recovered after the earthquake which sadly destroyed most of the houses in the area. Supported by a guide and porter the trek took us through various ecosystems and terrain, crossing raging glacial rivers, and hiking through lush forests to high arid mountains plateaus. Nepal is so diverse, I just love hiking from village to village, living and breathing the local culture. Many villages in Nepal are now crisscrossed by roads that are only accessible during the dry season, to try and attempt to travel by road anywhere in Nepal is attempting fate. Travelling can sometimes up to 10 hours by 4WD to get to your destination over some of the roughest terrain in the world. You may say it is risky but it is part of the adventure of travelling and this time I only have myself to look after rather than managing a group of would-be trekkers.

I love the isolation of trekking alone, well not actually alone as I would not be that fool-hearted to go alone in remote unchartered areas, I am always accompanied by an experienced guide and porter. My favorite section of the hike was from Machha Kola to Larpak, the weather was hot and sticky as we started to climb steeply from the river, zig-zagging our way up the ridge. After several hours of climbing,  we turned the next corner and were greeted with a cooling breeze. Hankering for a cup of chai I was expecting to see a village or some type of civilization, but no such luck, in front of us was another ridge and another valley to climb. The trail that we took was not your normal tourist trail, it was a trail that locals had been using for years to walk from their village to civilization to get supplies to store for winter months. I must say that I thought we would at least see some locals either on the trail or working in the fields, but like I said I just love the isolation. The terrain was wild and fascinating, and to be the only person for kilometers made me feel alive in this remote wilderness. After 9 hours of walking with only a couple of snack breaks, we reached our destination of Larpak. Our homestay was very clean and very basic, a young girl who was only about 18 greeted us with a surprise smile on her beautiful face. Exhausted, dirty, tired, and hungry I could not muster up the energy to decide what I wanted first. A shower was out of the question as there was not any hot water, so wet wipes were on the agenda, followed by a big hearty bowl of hot soup. After a full stomach, I snuggled down in my sleeping bag on a somewhat hard bed and slept for 9hours.

The next day we woke to a stunning sunrise and views of the magnificent surrounding 6,000-meter peaks. It was a great spontaneous decision to rest our aching bodies and sore feet. After a hearty breakfast of porridge and pancakes, the water was boiled for a refreshing bucket shower, the remainder of the day I spent time meandering around the village chatting to the locals whilst our guide and porter helped harvest the fields, every helping hand is gratefully received to do this hard back-breaking work. 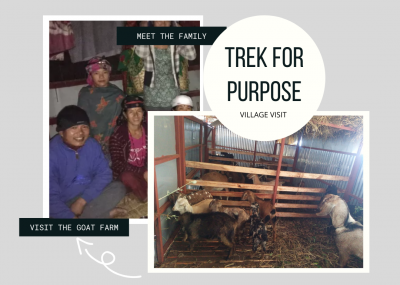