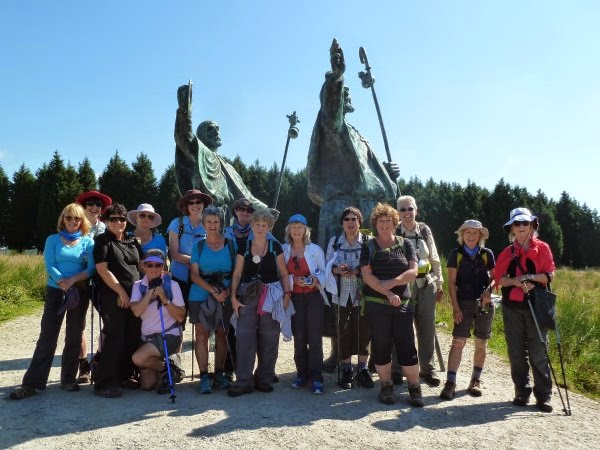 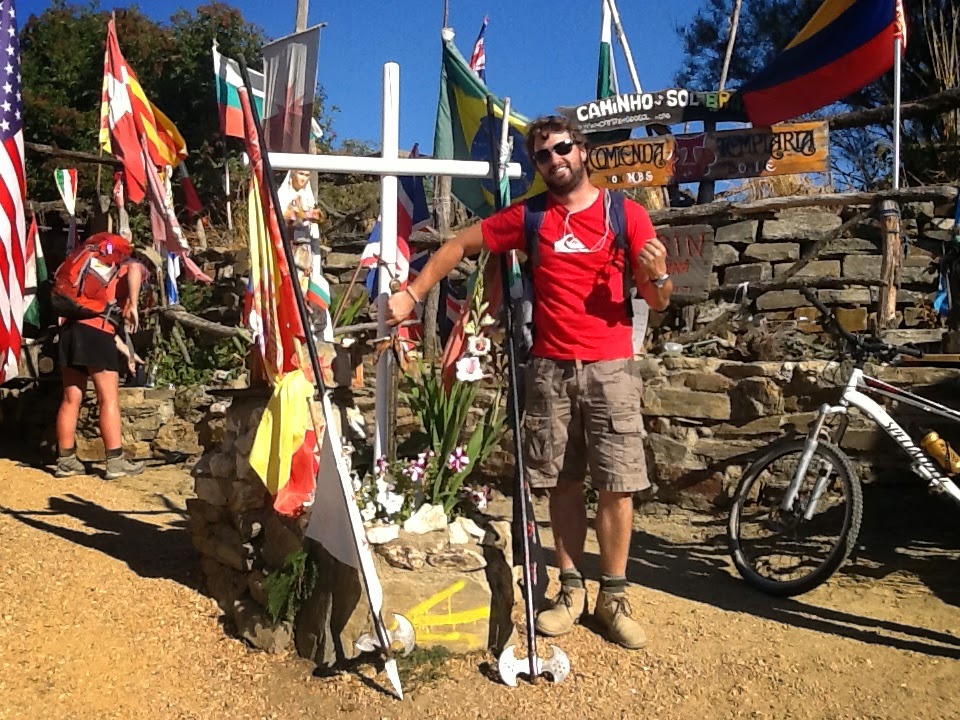 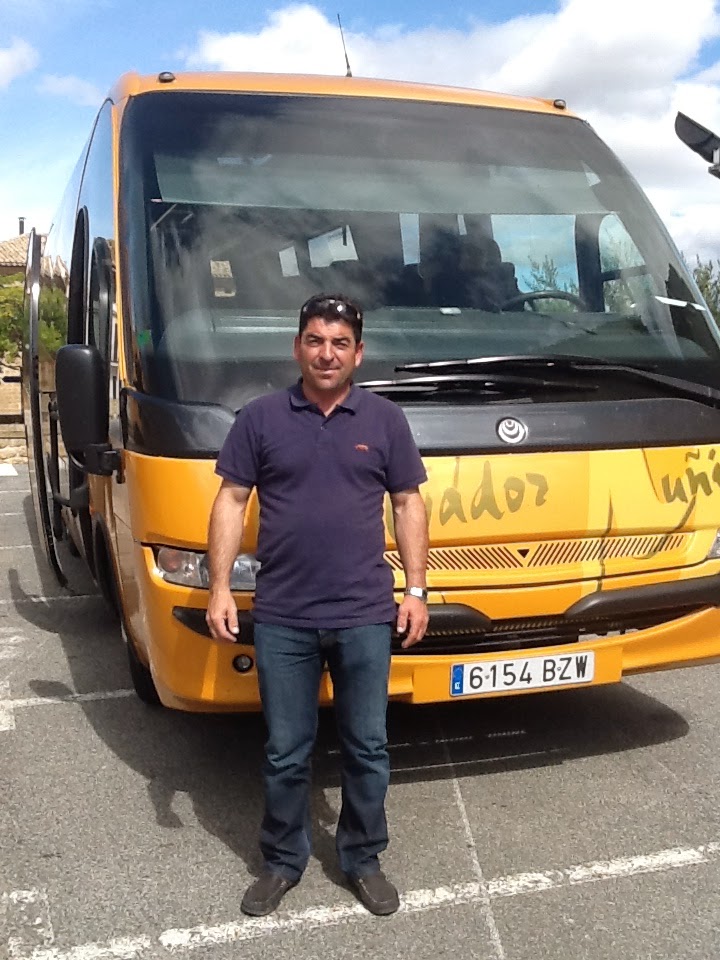 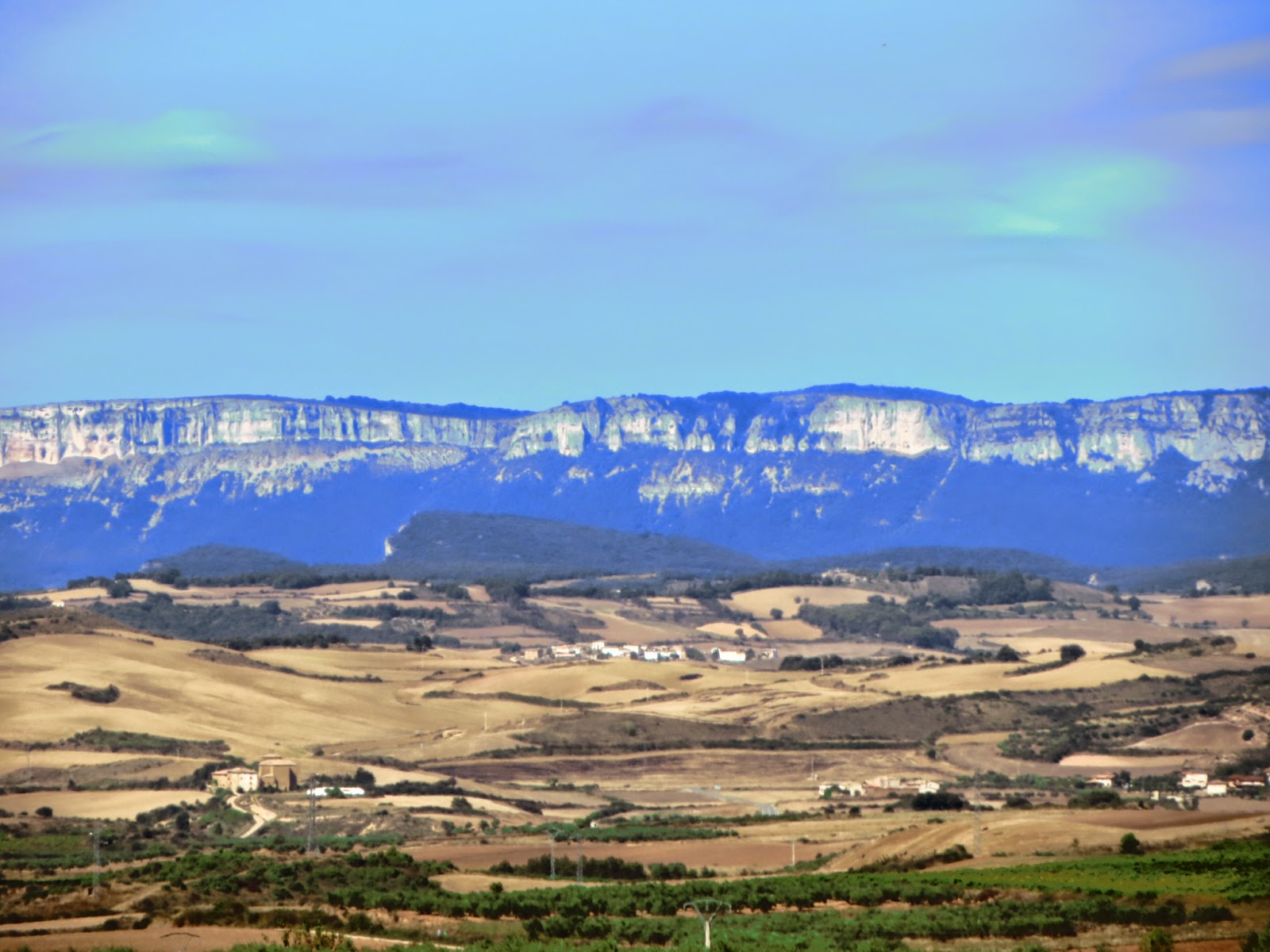 Oh dear sorry I have not sent you an update since day 8 and SO much has happened!!! It has been an awesome journey and I have had SO much fun and MANY unforgettable experiences. The people I have met and traveled with have been  inspirational read on …. I was blessed to be able complete the whole trek without any blisters or pain but I came across LOTS of people who were not as fortunate – but they carried on anyhow!!! Some had disabilities and would take a LONG time to travel the 800kms from St Jean Pied de Port but were determined to do it, some had blisters so bad they had to walk in thongs with their feet bandaged, some were in varies stages of the cancer demon and some were very old or very young but just as determined!
After leaving Logrono we stopped at a Monastery/winery near Irache where they had not only the tap providing water for pilgrims but another tap which produced local wine!! Unfortunately it was a bit early to indulge too much ;(
We followed this great start to the day with an interesting trail full of ups and downs and a variety of landscapes – from forest tracks up to a plateau of oak woods, even spotted our first golf course there, then on to amazing views from the Matacon Hills.
On our trip we coach through industrial areas and a lot of the tracks that run beside the highways thankfully. We visited many beautiful old cathedrals and churches along the way. Especially Burgos and Leon which had HUGE Cathedrals and both towns were filled with amazing history and architecture, centuries old!
An important part of the trip for most Pilgrims is near Foncebadon where there is a cross on the top of a long stick – Cruz de Fierro. Here Pilgrims leave a rock/shell/photos of loved ones deceased and living and believe sins are forgiven and blessings are received so it was the end of the journey for some for centuries. It was a VERY emotional time for many.
Astorga was an amazing place and our hotel was beautiful with views of a Gaudi designed castle from our windows. It looked just like the ones in all of the “Once upon a time” fairytales!

Next morning we finally entered glorious Galicia after a picturesque climb to almost 2000m. The track was steep and very basic but gorgeous with a misty, forest walk for a few hours! We were excited to come across a farmer herding his cows along it and then some handsome gypsies on their magnificent horses. If only we knew we could have ridden up! He he The views down the valley were amazing!!!! We visited some quaint Pallozas – Pre-Roman circular houses with thatched roofs and a 9th century stone church. We had our first delicious HOT Galician soup for lunch here at Cebreiro at 1300m – rather chilly! That night we went to lovely Lugo and explored its OLD town enclosed in an OLD stone wall.

In Sarria we picked up another 4 ladies who wanted to join our group for the last 120 kms or so. It was a lovely 15 days for them but very full on. We saw lots more amazing churches and scenery and did a few “killer climbs” but finally made it into Santiago de Compostela and visited the Apostle St James in his crypt and attended a mass in his Cathedral!!! What an incredible feeling it was!! We were SO lucky to arrive on a special Tuesday as they don’t swing the giant incense burner at every service now 🙂

No pilgrimage is complete without visiting Finisterre (the end of the World – according to the early Romans). We also visited a beautiful “magical and curative” place on the coast called Muxica where the stone ship containing St James remains landed – reportedly! They believe that if you write all of your demons and bad things on your shell that u carried with you, they will disappear when you throw it into the ocean there. We also visited Cape Vilan lighthouse and were amazed by the spectacular cliffs and rugged coastline.
We had a quite a few nights enjoying Spanish Sangria and lots of laughs and had the most amazing Paella one night at Armenal. Most of the accommodation and food was FABULOUS!! Everyone is disappointed that they didn’t lose weight with all the exercise – but after late 8.30ish 3 course meals and local wines provided every night as well as a few drinks and chats in the bar before hand  – not surprising ;

We were all very sad to end this trip and say goodbye to everyone – we formed some great friendships through the special experiences that we shared – and our wonderful guide David who deserves a medal/pay rise for taking such good care of so many crazy Aussie ladies with such an array of navigational skills and fitness levels but always doing it with a smile, no matter what was required of him! Some of us wanted to walk more than was suggested on the itinerary and some less but all requests were granted where possible. I hope Lyn realises what an asset she has in him.

Four of us caught the train to Madrid for a few days and took in the sights, did some shopping and were blown away by the fabulous atmosphere at a Flamenco show. There was a HUGE political demonstration and police sirens/paddy wagons/riot squad presence outside our hotel on Saturday night but 2 of us still went to the show! We just walked in the opposite direction to get to the Metro – seeing as they closed the roads 😉
At Madrid airport now for a few hours before I fly to London to see Kyle and Brooke 😉 – the fun continues!!
Sherry