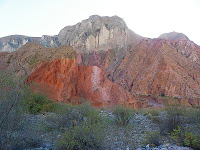 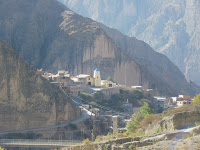 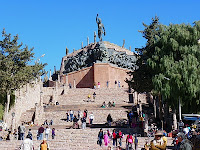 Two days ago we sadly departed Pumamarca for Iruya commonly know as the Jewel of the north. We were not disappointed as Iruya is a beautiful little village hidden among the mountains. The trip takes nearly all day, on the way stopping at the quaint little town of Humamarca for lunch, we then travelled on a sealed road for about 50klm before turning off to the west on a rough gravel road. After about 1 hour through barren countryside and a rough dirt road we began to wonder if it was going to be worth the hardship of getting to Iruya, but our complaints were forgotten when we finally arrived and contemplated the overwhelming beauty of this tiny hamlet which literally seems to hang fron the mountains. Our hotel was situated on a large dug out plateau high above the village and our room afforded magnificent views of the village and valley below. At the time all I could think of was that I hope we do not have an earthquake during our 2 night stay in Iruya to be sure we would never survive.
After a good nights sleep we set off around 9am on a hike to San Isidro. The trail followed the river which at this time of the year is only a stream. In summer the village is usually cut off by sudden floods and mud slides so it is not recommended to visit Iruya from Dec- Feb. due to the heavy rains. The hike took 6 hours return including 1 hour stop for lunch at San Isidro. We were very fortunate to be here on Independence Day, and as we arrived at this tiny village the children were giving a school performance in their play area. The scenery whilst hiking is dry and imposing and on the sides of the mountains one can see the silhouettes of abode huts and neat crop patches.
The landscape reminds me of my past trips to Tibet and Ladakh in India. Iruya is suspended from the cliff of a huge ravine. Surrounded by breathtaking landscape, its steep cobbled streets seem to belong to a distant past. Its culture has a distintive pre Hispanic characteristic, which can be seen in its celebrations that mix both heathen and Christian elements. From 12am until 4pm all the small shops are closed for siesta.
After an awesome 8 day circuit starting and ending in Salta, tonight we fly to Buenos Aires where we will spend the next 4 days taking in the sights of the city. I have been to Buenos Aires 4 times on previous visits, but it is Alans first time and I know he is looking forward to getting out of this dry mountian air and returning to the humidity of Buenos Aires. My group departed for Sydney on July 1st, and fortunately all managed to aquire extra seats on their Aerolines Argentinas flight to Sydney so we are certainly hoping and praying that we will manage to lie horizontal for the 19 hour flight.
Until my next group tour in 1 months time
Adios from Lyn
Filed under: Adventure travel

Cost: $1699 per person twin share (enquire about our single supplement)

Offer: Date of your choice is available for groups of 6 people or more.