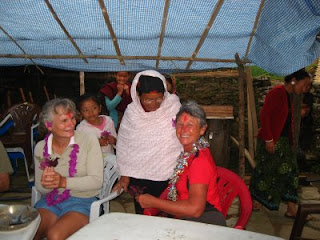 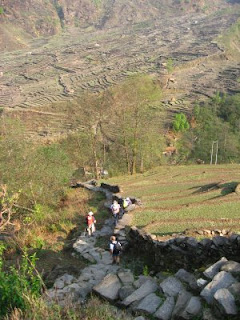 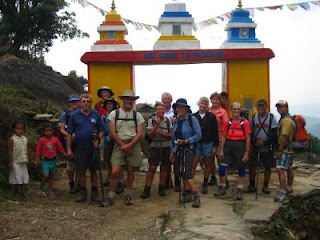 4 DAY HIKE TO POKHARA
We returned from our 4 day home stay trek yesterday and it was such an amazing experience for everyone. After a 6 hour bus trip from Bhaktapur we arrived in Besisahar. Whilst we had lunch our guides TB and Prakash hunted out landcruiser’s for the 2 hour drive to Ghale Geon situated 2050 metres above Besisahar and hour first home stay of the 4 day trek. We all bounced around in the jeeps whilst the very skilled driver negotiated the potholes and mud holes slipping and sliding we finally reached our drop off point. As the clouds began to roll in and the thunder started we knew that we would be in for a wet walk. After 1/2 an hour the lightening started those holding poles and umbrellas quickly put them away. After each clap of thunder we knew that there would be a huge flash of lightening so we tried to make it past the next tree. The light quickly began to fade and we could just make out the trail and finally the village where we would be staying. On arrival TB began to organise the group and we were ushered up narrow paths and negotiated steep steps to our cozy rooms. After a warm meal and some ruksi (local wine) we all began to feel human again. Tomorrow is another day.

Then next morning appeared bright and although hazy we were able to make out the mountains of Annapurna and Himchuli. After a hearty breakfast we then continued to our next accommodation. The remainder of the days we hiked down to rivers and up through terraced fields staying in beautiful remote villages and entertained by the local people. It was a wonderful trek and many people who travel with commercial groups do not get this unique experience.

On our last day we were to hike down for 3 hours to our private bus but were told that there was a road strike in Nepal and no vehicles were allowed onto the highways. After much discussion our guide managed to hire a local bus and driver who would take us all the way to Pokhara. We all piled on the bus some of us were brave enough to have the experience of riding on top.

We reached Pokhara and our hotel and straight into our hot shower. The next 2 days we will enjoy the sights of Pokhara, shop and prepare for our next trek which will be Annapurna Base Camp.

Next post on our return to Pokhara from ABC 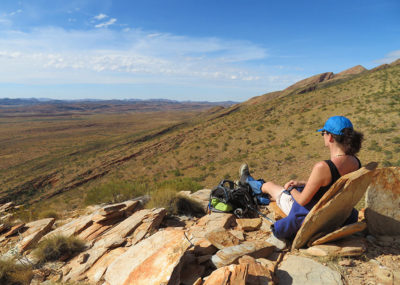