The correct name for the Mongolian nomadic dwelling is called a “ger.”It is well suited to the country’s extreme climate and nomadic way of life. Its wooden frame, covered by wool felt, can easily be collapsed, transported to another location and put up again, fully preserving its original shape.
During the Mongol Empire, Mongolians sometimes built their ger on carts to move their flocks of sheep easily. The French Monk, William Rubruquis, who visited Mongolia in the 13th century, witnessed the distance between the wheels of such a platform to be 20 feet (6.5m), and the ger protruded at least 5 feet over each wheel. The cart’s platform that held the ger was drawn by 22 oxen. Gers of that size were made specifically for nobility. However, they fell out of use as the carts were clumsy, and the gers could not be hauled over long distances as there was the danger of getting stuck in the mud or tipping over. During certain war campaigns, the noblemen preferred to use big tents of bright and durable cloth.
The modern shape of the Mongolian ger has evolved over time. The Mongolian ger is one of the tremendous achievements of construction designs and architecture in terms of its form, structure, durability, lightness and low price. The ger is stable against strong winds, and the air inside the geris well ventilated. It is warm to stay in the ger during wintertime, yet it is cool in the summer.
Join us on a tour to Mongolia departing July 2017 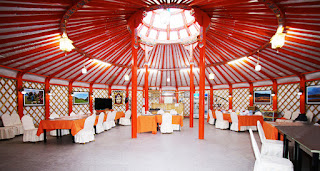 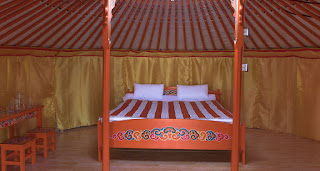 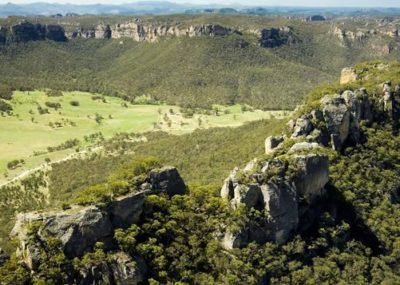 Cost: $1599 per person twin share (enquire about our single supplement)

Offer: Date of your choice is available for groups of 6 people or more.